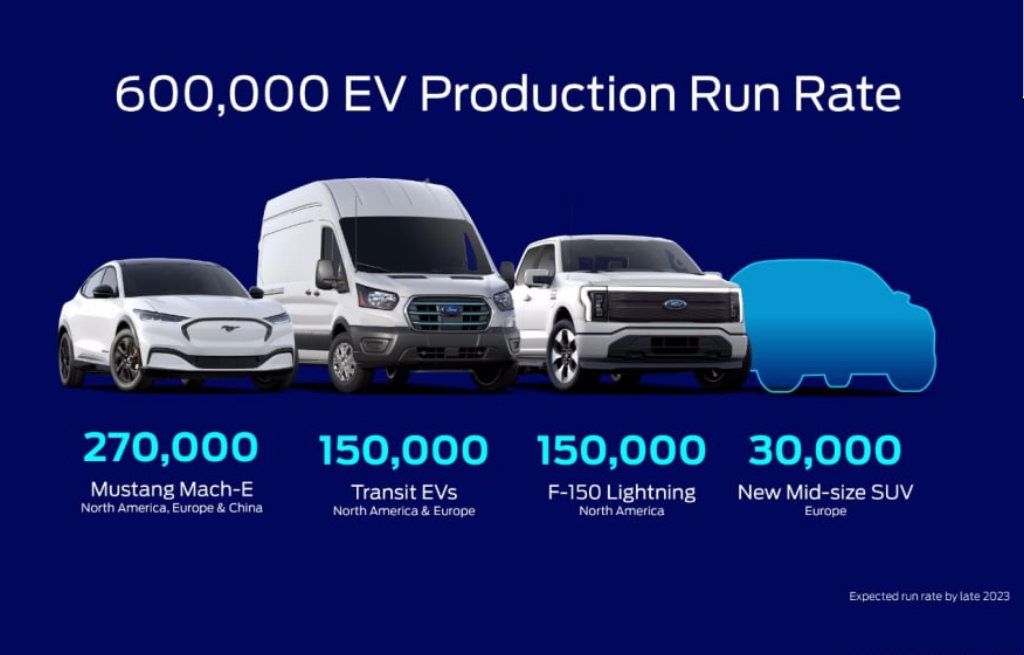 DEARBORN, Mich., July 21, 2022 – Building on strong demand for its new EVs, Ford today announced a series of initiatives for sourcing battery capacity and raw materials that light a clear path to reach its targeted annual run rate of 600,000 electric vehicles by late 2023 and more than 2 million by the end of 2026.

The company detailed its global vehicle portfolio plans supporting these production goals as  part of its Ford+ plan. Ford expects a compound annual growth rate for EVs to exceed 90% through 2026, more than double the forecasted global industry growth.

“Ford’s new electric vehicle lineup has generated huge enthusiasm and demand, and now we are putting the industrial system in place to scale quickly,” said Jim Farley, Ford’s president and CEO and president of Ford Model e. “Our Model e team has moved with speed, focus and creativity to secure the battery capacity and raw materials we need to deliver breakthrough EVs for millions of customers.”

Ford plans to invest over $50 billion in EVs through 2026, targeting total company adjusted EBIT margins of 10% and 8% EBIT margins for EVs by 2026.

As Ford creates a new EV supply chain that upholds its commitments to sustainability and human rights, the company continues to plan for more than half its global production to be EVs by 2030 and achieving carbon neutrality globally no later than 2050.

Ford in Europe on track to go all-electric by 2035

In Europe, the Ford Cologne Niehl Plant is currently undergoing major construction updates to prepare for the production of electric vehicles, starting in 2023. This includes the construction of a new 2500 square meter building that will be the home of the new and efficient pre-coating line on five floors.

Furthermore, the current manufacturing facilities will be updated with new energy efficient solutions that will save more than 2,000 tons of CO2 and more than 2,600 MWh of electric energy per year.

The first electric passenger vehicle is expected to roll-off the Cologne production line in 2023, with a second EV model to be built starting in mid-2024. Annual volume at the new plant is expected to reach 200,000 vehicles per year.

The redevelopment of the Niehl plant is a significant step towards helping Ford achieve an all-electric future in Europe and contributes to its target to be carbon neutral across its European footprint of facilities, logistics and suppliers by 2035.

Ford is adding lithium iron phosphate (LFP) cell chemistry to its portfolio, alongside its existing nickel cobalt manganese (NCM) chemistry. This creates even more capacity for high-demand products and provides customers many years of operation with minimal range loss. It also reduces the reliance on scarce critical minerals such as nickel and, at current costs, brings a 10 to 15% bill of material savings for Ford versus NCM batteries.

The company confirmed it has secured 100% of the annual battery cell capacity needed – 60 gigawatt hours (GWh) – to support this 600,000 EV run rate by working with leading battery companies around the globe.

Ford also is leveraging its long-standing connection with LG Energy Solution (LGES) and its strategic relationship with SK On to meet its battery capacity target for late 2023.

Plus, SK On has installed capacity to support the scaling of Ford’s high-volume F-150 Lightning and E-Transits through late 2023 – scaling NCM cell production beyond earlier-planned levels from its Atlanta facility and providing new battery cell capacity from its Hungary operation.

Driving to more than 2 million EVs by late 2026

Ford is building on agreements tied to its 600,000 run rate milestone and is taking them even further. The company now has sourced approximately 70% of the battery cell capacity it needs to support an annual global run rate of more than 2 million EVs by late 2026.

Ford and CATL – the world’s largest battery producer – have signed a separate non-binding MOU to explore a cooperation for supplying batteries in Ford’s markets across China, Europe and North America.

Ford also announced it plans to localize and use 40 GWh of LFP capacity in North America starting in 2026.

The company intends to use this additional capacity to complement three previously announced battery plants in Kentucky and Tennessee that are part of the BlueOval SK joint venture between Ford and SK On, which was officially formed last week. Ford has signed an additional MOU with SK On as well as Koç Holdings to create a joint venture in Turkey for expanded battery capacity there.

“Our team has been actively engaged with partners in the United States and around the world,” said Lisa Drake, Ford Model e vice president, EV Industrialization. “We will move fast in the key markets and regions where critical supplies are available, meeting with government officials, mining companies and processors and signing MOUs and agreements that reflect Ford’s ESG expectations and underpin Ford’s plan to bring EVs to millions.”

Today, the company announced it is working with major mining collaborators and has sourced most of the nickel needed through 2026 and beyond. Ford has signed non-binding MOUs with:

Ford also has locked several key lithium contracts. Beyond the recently announced key asset in Western Australia secured through Liontown Resources, Ford also has signed a non-binding MOU with Rio Tinto, exploring a significant lithium off-take agreement from its Rincon project in Argentina. This is part of a multi-metal MOU that leverages the scale of Ford’s aluminum business and includes a potential opportunity on copper.

Ford also continues working to localize processing of key battery materials in North America. To that end, the company is announcing:

“It’s a very competitive landscape. These collaborators see value in the strong demand we have created with exceptional products like Mustang Mach-E and F-150 Lightning and the stability we can bring to these relationships,” Drake said. “We are excited to work with them – and others we haven’t yet announced – to build this new global supply chain for Ford.”

For the first time, the majority of consumers who intend to buy a car in the next two years say they will choose an EV or hybrid vehicle – up 11% from last year and 22% from 2020, according to research published by EY. Most of that increase is for full EVs.

Among commercial owners who don’t already deploy EVs, 60% of U.S. fleet managers said in a Ford Pro survey they plan to add EVs to their operations within two years.

To further stimulate demand, Ford is working to make EVs accessible to millions, addressing barriers to entry such as charging, cost and improving the EV customer purchase experience.

“This is our opportunity to win a whole new group of customers, building their loyalty and advocacy as we grow our market share," said Marin Gjaja, Ford Model e chief customer officer. "We're developing the digital and physical services and experiences those new customers expect when they purchase a product that to them is a new technology purchase. Our aim is to combine the convenience of digital shopping with Ford’s expertise, scale and the physical presence of our dealers to create the best possible experience for tomorrow’s EV owners.”

Statements included or in corporated by reference herein may constitute “forward-looking statements” within the meaning of the Private Securities Litigation Reform Act of 1995. Forward -looking statements are based on expectations, forecasts, and assumptions by our management and involve a number of risks, uncertainties, and other factors that could cause actual results to differ materially from those stated, including, without limitation:

Ford and Ford Credit’s financial condition and results of operations have been and may continue to be adversely affected by public health issues, including epidemics or pandemics such as COVID-19;

Ford’s long-term competitiveness depends on the successful execution of Ford+;

Ford’s vehicles could be affected by defects that result in delays in new model launches, recall campaigns, or increased warranty costs;

Operational systems, security systems, vehicles, and services could be affected by cyber incidents, ransomware attacks, and other disruptions;

Ford’s ability to maintain a competitive cost structure could be affected by labor or other constraints;

Ford’s ability to attract and retain talented, diverse, and highly skilled employees is critical to its success and competitiveness;

Ford’s new and existing products, digital and physical services, and mobility services are subject to market acceptance and face significant competition from existing and new entrants in the automotive, mobility, and digital services industries;

With a global footprint, Ford’s results could be adversely affected by economic, geopolitical, protectionist trade policies, or other events, including tariffs;

Industry sales volume in any of Ford’s key markets can be volatile and could decline if there is a financial crisis, recession, or significant geopolitical event;

Ford may face increased price competition or a reduction in demand for its products resulting from industry excess capacity, currency fluctuations, competitive actions, or other factors;

Inflationary pressure and fluctuations in commodity prices, foreign currency exchange rates, interest rates, and market value of Ford or Ford Credit’s investments, including marketable securities, can have a significant effect on results;

Ford and Ford Credit’s access to debt, securitization, or derivative markets around the world at competitive rates or in sufficient amounts could be affected by credit rating downgrades, market volatility, market disruption, regulatory requirements, or other factors;

Ford’s receipt of government incentives could be subject to reduction, termination, or clawback;

Economic and demographic experience for pension and other postretirement benefit plans (e.g., discount rates or investment returns) could be worse than Ford has assumed;

Pension and other postretirement liabilities could adversely affect Ford’s liquidity and financial condition;

Ford may need to substantially modify its product plans to comply with safety, emissions, fuel economy, autonomous vehicle, and other regulations;

Ford and Ford Credit could be affected by the continued development of more stringent privacy, data use, and data protection laws and regulations as well as consumers’ heightened expectations to safeguard their personal information; and

We cannot be certain that any expectation, forecast, or assumption made in preparing forward-looking statements will prove accurate, or that any projection will be realized. It is to be expected that there may be differences between projected and actual results. Our forward-looking statements speak only as of the date of their initial issuance, and we do not undertake any obligation to update or revise publicly any forward-looking statement, whether as a result of new information, future events, or otherwise. For additional discussion, see “Item 1A. Risk Factors” in our Annual Report on Form 10-K for the year ended December 31, 2021, as updated by our subsequent Quarterly Reports on Form 10-Q and Current Reports on Form 8-K.

View all the latest Promotions from J.J. Griffith Ltd

View all the latest news from J.J. Griffith Ltd